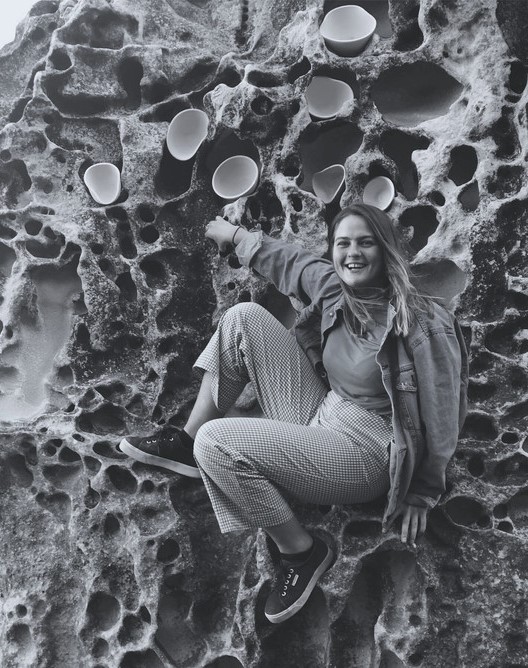 K atie Stewart is a Sculpture BFA graduate from The National Art School in Sydney, Australia, with a background in Painting. At the core of her sculptural practice she investigates structures of the natural and built world, and their impressions on the human form. Now invested in her painting practice, Stewart is interested in exploring the vastness of phenomena and its connection to the human form.

The sea plays a major part in Stewart’s life. It is where she finds comfort in being able to reflect on her insignificance when overwhelmed by routine problems. Being a bobbing head on a never-ending horizon line, she thinks it’s important to come back to beauty by contrasting itself to the scale of time and exploring the sublime. Playing with Balance of composition and exploring colour she imparts a ritual and hopes that by making something seem simple there is a sense of beauty that seems harmonious.

Stewart has collaborated on various projects and been involved with different competitions such as Sculpture by Sea, situated on the east coast of Sydney, and was a finalist of Macquarie Bank Emerging Art Prize. She has also collaborated on numerous projects supported by Sydney based bamboo art and architecture collective ‘Cave Urban.’

“Motivated by understanding the past, I have tried negotiating the feeling of nostalgia to discover comfort in space to transcend an understanding of phenomena. Each work attempts to symbolise the human psyche found in the action of exploring consciousness and subconscious. Hauling together escapism and emersion from patience and perseverance, all I believe are found in a body of water”.

/* Each work attempts to symbolise the human psyche found in the action of exploring consciousness and subconscious. */