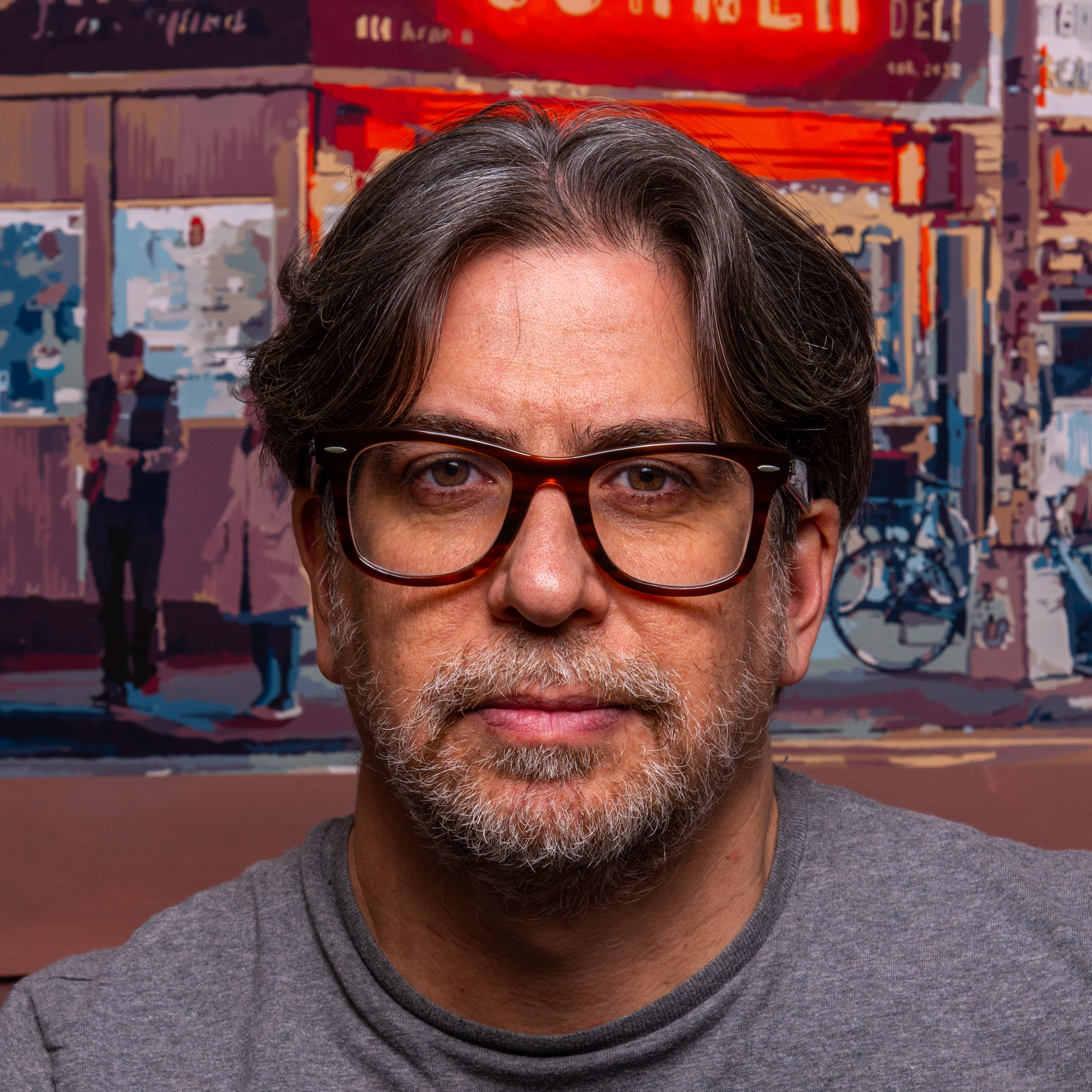 M arco Barberio is a self-taught artist who was born in Italy in 1971. During his life, he cultivated a passion for art and creativity, even without attending specialized schools. Inspired by the American movement of graffiti in the 80s and pop art, he started painting. His self-development was highly affected by the technological advancements in the 90s and particularly the birth of the internet, and as a result he chose to combine his entrepreneurial intuition, his fascination about new technologies and his love for art to found a web company, which he led as the art director. But he never stopped painting on the side. A major influence to the themes of his paintings were the metropolitan elements he was exposed to during his travels in the US which he reforms to include the pop art details he has always been drawn to. Travelling in general made him wish to depict the vibe of each city as observed and experienced from one tiny part of it. “The idea is to capture the vital breath of the city through the flow of people's life on the street”, he suggests. However the root of this never-ending search is the dualism that he experienced growing up, constantly trying to trigger a reconciliation between the entrepreneurial and the artistic sides of him, which he is choosing to silence yet also empower by capturing the most tempting aspect (the vital breath/the vibe) of a city. Its refreshing properties that signal a beginning…an opportunity…to introduce a new story.

Another expression of this dualism of his mind and personality is the tactful application of a technique he calls “sampled realism”. The parameters that shaped his development from birth; being science and art, were constantly evolving and flourishing into further sub-parameters in parallel to his growth, creating a multidimensional web, in which he attempts to define time, space and change - the changes that he has invested his mind passion to. He chose the end goal of this ever-expanding multi-dimensional overview of his being to be realism. Besides, that is the aim of any abstract and perplexed mental journey we delve into; and thus, a flashback to reality and space for us to choose a practical action or omission.

Nevertheless the actual overview is attempting to isolate the aspect of change and transition on the web of time by sampling. Sampling in itself is a technique that is inevitably correlated with the change from analogue to digital sound. The way Marco applies it to art is by avoiding to showcase depth, movement and shadows, but not omitting the basic elements of time and space, considering the result will have to be realistic. And so he splashes different “samples” of time with different shades of colour, to allow the observer to draw their own timeline in the flicker of a moment that Marco captures in compositions of a sight within a constantly busy metropolis. And so time, space, change, science, history and art are being underlined as constantly present and perfectly rooted to host any story that the observer wishes to dream of or experience.

“That’s why I call it sampled realism: At first, the paintings seem to seek realism, but after a closer look, we notice all shortcomings marked by the sharp contrast between a curve and another. Unlike hyperrealism that was marked by the manic details, in every way exaggerated. In contrast to that sampled realism tends to deliberately leave out details and information. These gaps not only represent the shortcomings of our lives, but at the same time give us the opportunity to build a new reality reformulated based on our knowledge and experience.” He has exhibited his work in various exhibitions inter alia in Italy, Spain, the UK and Australia.

/* Time, space, change, science, history and art are being underlined as constantly present and perfectly rooted to host any story that the observer wishes to dream of or experience. */